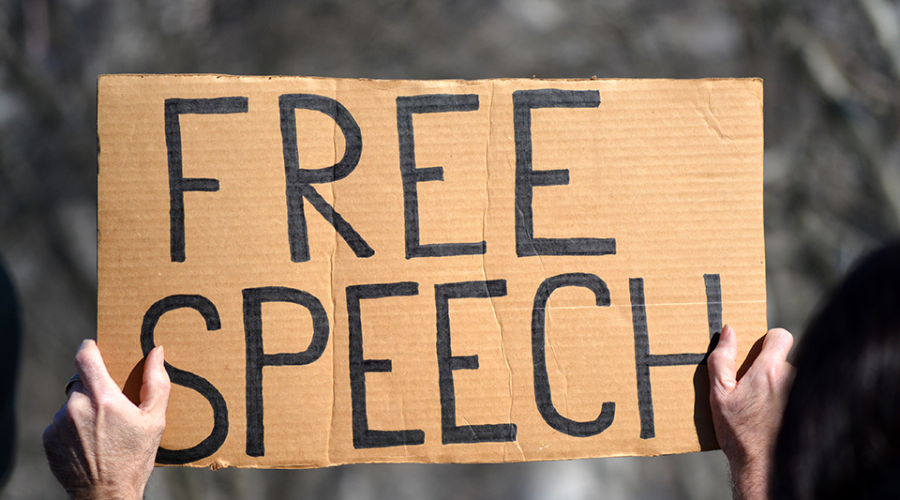 The last five years have sometimes seemed like a fumbling collective effort to discover the limits of public discourse—and free speech. Politicians, news outlets, and corporations have all been drawn into a vortex of disinformation, defamation, and fake news allegations. The Senate impeachment trial of Donald J. Trump, the Smartmatic lawsuit against Fox News, and the questions plaguing social media companies around censorship and de-platforming—to pick three current examples—all circle the same questions. What are the limits of free speech, and how should it be regulated?

The degradation of public discourse has been years in the making. It’s hard to say now what’s truly beyond the pale. Racism, sexism, misogyny, and ableism were not deal-breakers for millions of voters in 2016. The 30,573 false or misleading statements Trump made while in office—catalogued by The Washington Post—couldn’t deter 74 million who voted for four more years. And we’ve all grown to accommodate disinformation in the public sphere, laughing it off as exaggeration or opinion even as it gushed like an oil spill into the culture.

The storming of the Capitol was a turning point, as demonstrated by the severity of official responses to it. Now, regardless of whether Donald Trump is convicted by the Senate, both Congress and the “public square” appear to be making hesitant steps towards re-establishing some boundaries.

Trump’s lawyers have argued that what he said on January 6 is protected by his First Amendment rights and constitutes normal political speech. Clear juridical precedent refutes this black-and-white claim. Supreme Court Justice Oliver Wendell Holmes’s famous opinion in Schenck v. United States (1919)—that “[t]he most stringent protection of free speech would not protect a man in falsely shouting fire in a theatre and causing a panic”—is often cited as an example of how free speech might be weighed against potential harm. He continued: “The question in every case is whether the words used are used in such circumstances and are of such a nature as to create a clear and present danger that they will bring about the substantive evils that Congress has a right to prevent.” Democrats seem likely to prosecute a case in line with the Holmesian view.

Easier to prove than incitement is straight-up lying, a subject the media has tiptoed around for years. After all, even reporting what Trump says presents unprecedented challenges to them. The man who falsely yells fire, when given airtime, has significant reach; if his claim isn’t adequately debunked, panic can rise. Who then is liable?

In its $2.7 billion lawsuit against Fox News, election tech company Smartmatic makes the claim that broadcasters shoulder at least some of the liability. (The company is the subject of baseless allegations made on Fox by, amongst others, Trump lawyers Rudolph Giuliani and Sidney Powell that they enabled the theft of the election.) In their claim, Smartmatic identified “100 false statements and implications” aired on Fox shows and claimed “an estimated loss of more than $500 million in future profits.”

Fox, though, has countered: “If the First Amendment means anything, it means that Fox cannot be held liable for fairly reporting and commenting on competing allegations in a hotly contested and actively litigated election.”

The outcome will be closely watched by those interested in its implications for platforms that repeat or amplify disinformation in the course of reporting it.

Social media companies—whose platforms are precisely designed to amplify information—have been among the most hotly debated vectors in the free-speech debate. It wasn’t just Trump supporters who were upset by his deplatforming following the storming of the Capitol. German Chancellor Angela Merkel was among international leaders and commentators reportedly disquieted by Twitter’s decision to ban him permanently, a move with worrying implications for what’s been called the “top-down, private control of speech in the modern public square.” This debate must be had if powerful tech companies, some of which boast annual turnover to make a small country blush, are to be prevented from exceeding governments in executive power.

Anguished tweets by Twitter CEO Jack Dorsey weighed “public safety” against the case for free speech—even though, as a private company, Twitter is not bound by the same First Amendment restrictions as Congress. It is, however, protected by Section 230, which shields platforms such as Twitter from liability for the material published on them by third parties. Perhaps not for long. President Biden said during his campaign that “Section 230 should be revoked,” and the SAFE TECH Act, introduced last week by Senator Mark Warner, would, if passed, see new limitations placed on the protections it affords to private companies, including making it easier for victims of harassment to sue social media titans.

The balancing act we must achieve—in the impeachment trial, in courts of law, in our legislative bodies—is one in which the principle of free speech is honored even in the breach. Regulations must be written in good faith, with public safety and the integrity of fact-based debate at their heart, for they are the best way to regain discipline and restore order to our democracy. We must see the First Amendment not as an absolute but as an ideal. Purposeful Communications helps companies modernize their approach to strategic communications and marketing initiatives. If you need help with your communications efforts or have a question on your strategy, please email founding partner Frank De Maria here, or visit our website for more information.